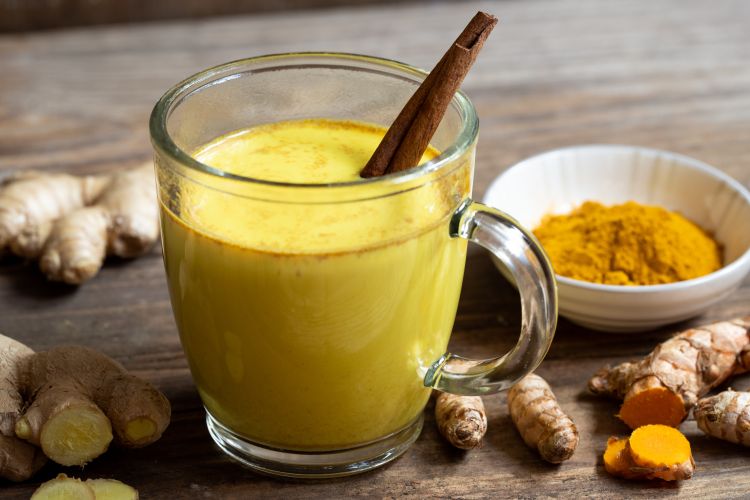 Zubereitung
Finely ground the ginger and mix all ingredients in a blender. You can enjoy Golden Milk as hot or cold drink or even foam it up: Put the liquid in a pot, bring to the boil and simmer over low temperature for two minutes. Whisk by hand or with a milk frother.

Tip: You can also prepare Golden Milk with turmeric paste. For a homemade turmeric paste, put 200 ml water and 3 tablespoons turmeric powder in a pot. Peel and grate a thumb-sized piece of fresh ginger and add to the mix. Season with a pinch of nutmeg and black pepper. Boil up while whisking and simmer for around 10 minutes. Let the paste cool down and freeze it in an ice cube tray. This makes it durable for several weeks. For preparing Golden Milk, simply heat 1-2 cubes with vegetable milk, coconut oil, cinnamon almond oil and agave syrup in a pot.

Hinweise
The special ingredient in Golden Milk, also known as Golden Latte, is turmeric. It stems from the ginger family and has been an integral part of traditional oriental cuisine for thousands of years. In Germany, the roots are mostly known as ingredient in Southeast Asian dishes. The aromatic golden powder made from turmeric plays an important role in Ayurvedic cooking and is said to have many healing effects, e.g. anti-inflammatory properties.

The detox drink is often based on almond milk but you can also use oat or soy milk. Many recipes recommend to add a teaspoon of almond oil per cup. So warm or cold Golden Milk is the perfect recipe to try out our almond oil, our almond vanilla spice oil or our cinnamon almond spice oil.